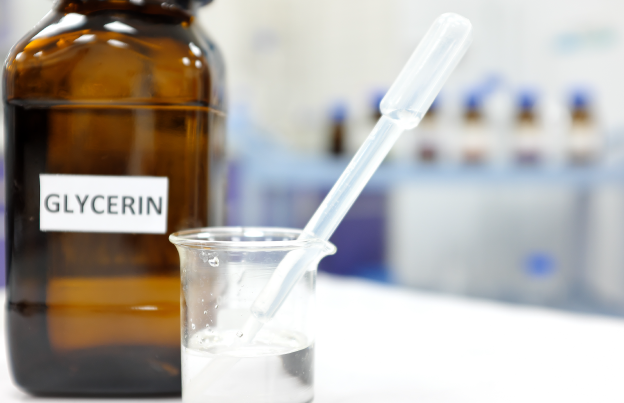 Where Does the Glycerin Come From?

Glycerin is a very common ingredient in the modern food and drug industry. The food industry commonly uses it to thicken, stabilize and soften its products, or to act as a solvent, prevent crystallization, and many other functions. In medications, glycerin is often found in solutions (such as syrups, suspensions, and drops), ointments, and capsule coatings.

There are two common ways to produce glycerin: 1. Hydrolysis of fatty glycerides 2. Chemical reactions with propylene gas produced from petroleum. The glycerides used in hydrolysis can be derived from either vegetable oils or animal fats; those derived from animal fats are usually not kosher. The Poskim disagree about whether food items or medications that contain glycerin from an unknown source are in fact kosher[1].

Over the years, pharmaceutical companies and other manufacturers in Israel have transitioned to using kosher glycerin exclusively and one may therefore presume that these medications are kosher[2]. However, there is no guarantee as to the source of glycerin in medications that are produced outside of Israel. According to the poskim that medications containing glycerin that may be animal-based are forbidden, how can we address the kashrus concerns?

One possible solution is to apply the concept of “Bittul be’Shishim” (nullification of the forbidden components if it is less than one-sixtieth of the volume of kosher substances). According to the Shach (Y.D. 92:8), one may deliberately (lechatchila) nullify “Safeik Issur” (an item whose forbidden status is in doubt). For example, a syrup or elixir could be mixed into an adequate volume of water or juice to nullify the forbidden glycerin. However, this would not be a practical solution for every type of medication that contains glycerin.

Other medications come in the form of a capsule whose outer coating contains glycerin. While it may be possible to break open the capsule and swallow just the contents, this is also not always practical and one must be especially careful not to lose any part of the inside of the capsule. In addition, many capsules have a coating that is designed to dissolve slowly in order to release the medication over an extended time and opening the capsule to avoid consuming the gelatin in the coating could even be dangerous.

In the following paragraphs, we will discuss whether one may rely on a manufacturer’s statement that the glycerin in its products is plant-based and not animal-based.

The Gemara in Avodah Zarah (35b) explains that the Chachamim forbade drinking milk that was not supervised by a Jew from the time of milking due to a concern that the non-Jew would switch or substitute kosher milk with the forbidden milk of a non-kosher animal. If a Jew supervises the milking and can attest that the milk is from a kosher animal, the milk is permitted. (See Shulchan Aruch Y.D. 115:1)

Rav Moshe Feinstein zt”l (Igros Moshe, Y.D. 1, 47) famously ruled that when we are certain that the non-Jew would not mix (or switch) non-kosher milk with kosher milk, then that certainty is equivalent to actual visual supervision and the milk is permitted. Therefore, in countries where government agencies forbid mixing cows’ milk with that of a non-kosher animal, one may be lenient and drink Chalav Stam.

Rav Moshe does conclude that a “Ba’al Nefesh” should be stringent in this matter[3]. However, those who are lenient[4] are by no means treating this matter lightly and are very much acting in line with Halacha[5]. The Chazon Ish (Y.D. 41:4) appears to concur with Rav Moshe.

Other Poskim disagreed with Rav Moshe[6]. Interestingly, Rav Moshe Shternbuch Shlit”a[7], cites ‘testimony’ that the Chazon Ish only ruled leniently for a sick person and not for the general public. Rav Shternbuch also attests, that the governmental supervision[8] in this area is lax and even those who are caught flouting the law, are only lightly penalized. Therefore, fraudulent individuals have no real fear of the law, and one may not rely on this leniency at all.

In terms of government standards, there is no difference between animal- and plant-based glycerin. The two are alike and can be used interchangeably. If so, even if a manufacturer of a product that contains glycerin would claim that it is plant-sourced, it would seem that there is no Halachic basis to believe them as they have no fear of government investigation. Thus, even those who are lenient regarding Chalav Stam should have no basis to be lenient here.

However, there may be other considerations.

In contemporary society, the vegan lifestyle has become extremely popular and widespread. Millions of people around the world are careful not to consume any animal-based products, including even the most minute ingredients. For that reason, one can find detailed lists on the Internet of products which contain even a small percentage of animal-based ingredients for the benefit of those who avoid them. In addition, food and drug companies have begun to take great care in labeling their products, clearly indicating whether they contain animal-based ingredients.

It is reasonable to assume that companies would not want to risk providing false information about their products. If they were to be discovered to have made false statements, the negative publicity could severely damage their business, particularly pharmaceutical companies whose credibility is critical to their marketing. One can therefore assume that the manufacturers’ claims regarding the source of glycerin in their products are accurate and reliable.

In light of this, perhaps we can apply Rav Moshe’s Heter for Chalav Stam to the question of animal-based glycerin. Just as Rav Moshe contended that governmental regulations and onerous penalties eliminate concerns that a non-Jew would switch Kosher milk with non-Kosher milk, similarly, the demands of the vegan community and the manufacturers’ desire to satisfy them should grant them credibility as to the source of the glycerin in their products.

An additional argument in support of the manufacturers’ credibility could be made based on the concerns that arose during the outbreak of Creutzfeldt-Jakob disease (also known as bovine spongiform encephalopathy (BSE) or mad cow disease) in the 1990s. At that time, many manufacturers made sure that the glycerin they used in their products was not animal-based. If these concerns are still relevant, they could also be a reason to rely on a manufacturer’s claim that the glycerin contained in its products is plant-based and not animal-based. It is further possible that financial considerations would bring a manufacturer to prefer plant-based glycerin over animal-based glycerin. If a manufacturer declares such a preference that could also be a reason to believe their claims.

These arguments are novel ones and, to the best of our knowledge, have not yet been discussed by the Poskim. They are merely proposals for future discussion. G-d willing, we will yet hear the opinion of the Poskim in this regard.

We consulted with Rav Yosef Zaritzky – a renowned expert in the field of kashrus – about the questions discussed above and these were his responses:

Although this is not directly related to our question, Rav Zaritzky also testified that both Rav Elyashiv zt”l and Rav Wosner zt”l permitted the use of animal-based glycerin in medications, even for healthy people.

[3] Rav Moshe himself was stringent.

[4] “Therefore, one who wants to rely [upon this logic] and be lenient has good reason and is permitted [to do so], as are many people who are Torah-observant, including many Rabbanim, and Heaven forbid to say they are acting against Halacha…one who wishes to be lenient is acting in accordance with Halacha and should not be considered as if he is treating prohibitions lightly.”

[5] Elsewhere (Igros Moshe Y.D. 4, 5) Rav Moshe writes that one should only be lenient in this matter in a “Sha’as ha’Dechak – pressing situation”.

[8] It seems that he was referring to South Africa as he writes that the fine was only 500 rand which is “not a significant [enough] amount to prevent someone from mixing in” non-kosher milk.