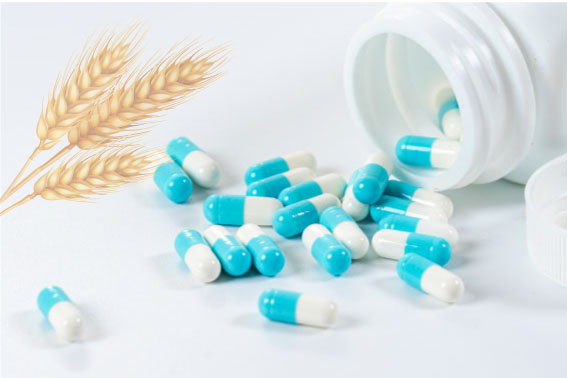 
For a seven-day period you shall eat Matzos, but on the previous day you shall nullify the leaven from your homes; for anyone who eats leavened food – that soul shall be cut off from Israel, from the first day to the seventh day.
(Shemos 12:15)

There are many medications that contain ingredients that are Chametz-based. Wheat starch, which is often used as a binding agent, and grain-based alcohols are typical ingredients. May one take these medications on Pesach?

It is permissible to derive benefit from Chametz that became unfit for even a dog to eat (“Nifsal me’Achilas Kelev”) before Pesach began (Pesachim 21b and Tosfos ad. loc. s.v. Charcho). Moreover, one does not transgress the prohibition of “Bal Yeira’eh uBal Yimatze” if he owns it during Pesach (Tosfos Pesachim 42a, s.v. v’Eilu and Shulchan Aruch O.C. 442:2 & 9).

Nevertheless, Chametz in this state is still forbidden to eat. The Rosh (Pesachim 2:1) famously rules that if a person is liable for eating Chametz that others would consider unfit for consumption, because by eating it has rendered it as fit to eat, at least for himself.

This novel idea of the Rosh is dubbed by the Rishonim as the law of “Achshevei” and is relevant to many areas of Halacha. For example, one of the criteria for transgressing the Melacha of carrying from one domain to another on Shabbos is that the item must be at least the size that would be sufficient for its regular function.  However, there are a number of exceptional items for which there is no Shiur because a person considers even the tiniest amount to be important (Shabbos 90b and Rashi ad. loc.) In fact, the same applies to any item whose owner considers it to be especially important (75b ibid.).

The Ritva (Makos 17a) uses the same concept to explain the position of R’ Shimon who holds that one transgresses Torah prohibitions even without consuming a Kezayis[1]. R’ Shimon’s reasoning is that by eating even a tiny amount, a person demonstrates that the prohibited substance is important to him. The Chacham Tzvi (86) contends that this is also the reason for the ruling of the Chachamim who hold that one has transgressed a Torah prohibition even when he does not consume a full Shiur (“Chatzi Shiur Asur Min haTorah”).

The Mishna Berura (442:43) rules that it is Asur mid’Rabbanan to consume Chametz that is not fit to be eaten during Pesach because of Achshevei.

In general, oral medications are taken in volumes smaller than a Kezayis, and are therefore only a “Chatzi Shiur”. Moreover, any Chametz in the medication is mixed with other ingredients and indistinct (“Eino b’Ein”), though it may be the principal ingredient (and therefore not “Botul b’Rov”). According to the Radvaz, when a forbidden substance is Eino b’Ein, the prohibition of Chatzi Shiur is only d’Rabbanan.

HaGaon Rav Asher Weiss Shlit”a[2] explains that the reasoning of the Radvaz is that Chatzi Shiur is only forbidden because of the principle of Achshevei (as the Chacham Tzvi maintained). Where the item is mixed with other ingredients, the person eating it cannot be said to have demonstrated that he values the forbidden substance in particular. It follows that there is no Achshevei and no reason to prohibit a Chatzi Shiur.

Nevertheless, Rav Weiss ruled that one should not rely on this to permit the use of Chametz containing medications on Pesach. He gave three reasons:

Our discussion thus far has been related only to the general Halachos of consuming Chametz. However, there are additional reasons to be lenient with regard to medications. Many of the Gedolei Acharonim contend that Achshevei does not apply at all to a person taking medications, though they offer varying reasons as to why. The Chazon Ish (O.C. 116:8) explains that the intent of a person taking a medication is only to ingest the active drug that will cure him; he does not pay any attention to the other ingredients, including the Chametz ones. Therefore, there can be no Achshevei on those ingredients and they are permitted as they are unfit to be eaten.

Rav Moshe Feinstein zt”l (Igros Moshe O.C. 2:92) argues that Achshevei can never apply to medications because people customarily ingest all sorts of bitter and foul-tasting medicines in order to cure themselves. The concept of Achshevei is that by eating something, a person demonstrates that he considers the item as fit to be eaten and that he personally finds it tasty and not repulsive, even though others would consider it unfit. When taking a medication, he has made no such declaration, as he is clearly only consuming it for its therapeutic properties, not because he considers it to be food. On the contrary, he also considers it unfit to be eaten, yet ingests it nonetheless.

A practical difference between the reasoning of the Chazon Ish and Rav Moshe would arise in a case when the Chametz is the active ingredient in the medication. According to the Chazon Ish, it would be forbidden to take this medication on Pesach because of Achshevei, as in this case the person does specifically intend to ingest the Chametz ingredient. (Chut Shani, Hilchos Pesach). However, according to Rav Moshe, it would be permitted since Achshevei can never apply to medications, even where the Chametz is an active ingredient.

In practice, Rav Weiss argues, that it is likely that the Chazon Ish agreed to Rav Moshe’s reasoning too, and merely added an additional reason to dismiss the potential for Achshevei with regard to medications.

At any rate, the conclusion of the Poskim is that medications that contain Chametz that has become unfit to eat before Pesach are permitted to a sick person (even if he is not in danger)[4].

Rav Shmuel Eliezer Stern Shlit”a in an essay on this subject, decries the recent tendency to be stringent with regards to Chametz-containing medications. He quotes Rav Elyashiv and Rav Wosner Zt”l who ruled that those who suffer from hypertension, diabetes, heart or liver conditions (or conditions involving other internal organs), or mental illness may certainly take their regular medications whether they appear on a list of ‘approved’ medications or not. In fact, they should not alter their medications even if an alternative is available[5].

Another important relevant Halacha is “Shelo k’Derech Hana’ah” – ingesting something in an unusual manner. If one consumes a forbidden substance in a manner other than the usual mode of eating it, one has not transgressed an Issur d’Oraisa (see Pesachim 24b and Rambam Hilchos Ma’achalos Asuros 14:10-11). Therefore, a sick person may drink a forbidden substance if it has been mixed with something bitter or eat raw non-Kosher meat for medicinal purposes (Shulchan Aruch Y.D. 155:3).

The Poskim discuss whether Chametz medications that contain sweeteners or flavor enhancers (that are not Chametz-based) are forbidden. Since the sweet taste renders the medication fit to eat, do we consider the Chametz to have become an edible substance? Rav Weiss is unsure about this matter for the Chametz itself remains unchanged – it is only edible because of an additive. Rav Shlomo Zalman Auerbach zt”l (Shemiras Shabbos Kehilchasa ibid.) ruled leniently in this matter.

The Nishmas Avraham (O.C. p624[6]) cites Rav Shlomo Zalman’s reasoning. Although on Yom Kippur it would be forbidden to take sweet-tasting medications, on Pesach it would be permitted. The prohibition of eating on Yom Kippur is dependent upon reaching a stage of “Yisuvei Da’ata” – relief and calm. Therefore, since the medication leads to Yisuvei Da’ata, it is forbidden even though he is consuming the actual medication Shelo k’Derech Hana’ah. However, the prohibition of eating Chametz on Pesach is simply dependent upon eating. Since he is eating the Chametz Shelo k’Derech Hana’ah (as the medication itself has a bitter taste) and it is only edible because of a sweet coating, it is permitted.

However, most of the Poskim disagree and rule stringently in this matter. (See Nishmas Avraham O.C. ibid. and Chazon Ovadia Pesach p126 et. al.)

The Sefer Shalmei Moed (p409) quotes a letter from Rav Shlomo Zalman who ruled that medications that are unfit to eat before Pesach are certainly permitted on Pesach. However, if they are not, it is better to make use of a medication that belongs to a non-Jew on Pesach and intend not to acquire it (so that one does not transgress Bal Yeira’eh). It will be permitted for him to ingest it as doing so is Shelo k’Derech Hana’ah. However, it is even better to wrap the medication in thin paper and swallow them together which is certainly Shelo k’Derech Hana’ah.

We should also mention that Rav Shlomo Zalman (in a Teshuva to Rav Scheinberg Zt”l) discusses whether it is permitted to swallow pills that contain Chametz (Minchas Shlomo 1:17). He argues that even those who consider swallowing items whole to be a form of eating were only discussing food items that are usually eaten in a regular manner. However, since the regular manner of taking a pill is to swallow it whole, the entire notion of “eating” does not apply and swallowing it whole is considered Shelo k’Derech Achila so it is permitted for a Choleh She’ain Bo Sakana.

A person who is sick (even if he is not in danger) is permitted to take bitter tasting medications on Pesach even if they may contain Chametz. If they are part of his regular regimen of medications (such as antihypertensives and the like) it is forbidden for him to switch to another “approved for Pesach” product.

Regarding medications taken only intermittently, it is preferable to use those that are approved for Pesach, but if there are none available, one may use a medication that may contain Chametz.

Headache medications that may contain Chametz should be wrapped in paper before swallowing (according to the majority of Poskim, the coating of the capsule is considered secondary (Tafeil) to the medication and it is not considered to be wrapped up so that it would be Shelo k’Derech Hana’ah). If possible, one should buy the medication from a non-Jew on Pesach and intend not to acquire them. If the pain is due to a chronic condition (such as migraine headaches), it is not necessary to wrap the medication in paper.

Some forbid the use of flavored or sweetened medications on Pesach but others permit them. One should act stringently if there are alternatives that are approved for Pesach.

According to the majority of Poskim, there is no issue of Chametz in creams, drops and sprays that are only for external use.

[1] According to R’ Shimon, the Shiur of Kezayis is only necessary in order to create the obligation to bring a Korban).

[3] “The Gemara in Yoma derives the Issur of Chatzi Shiur from a Posuk…do we impute the reason for the Derasha (“Ta’ama d’Kra”) is because of Achshevei?” (ibid.)

[4] In Kovetz Teshuvos 1:49, Rav Elyashiv also rules leniently in this regard. However, in 1:71, having cited the Chazon Ish, he adds that the Arugas haBosem was stringent in this matter.

[5] See below regarding analgesic medications.