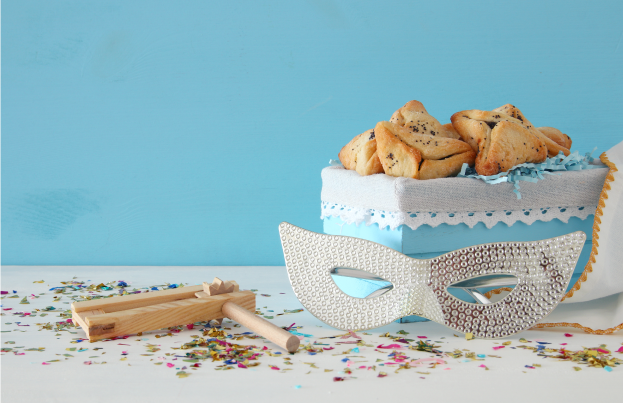 
“To observe them as days of feasting and gladness, and sending portions to one another, and gifts to the poor.” (Esther 9:22)
“What are the obligations of this meal (the Seudas Purim)? A person shall eat meat, and prepare a beautiful meal according to his means. He shall drink wine until he is inebriated and falls into a stupor. He is also obligated to send two portions of meat, or two sorts of cooked dishes, or two types of food to his friend. As it says, “and send portions to one another” – two portions to one person. Somebody who increases in sending to friends is praiseworthy. If he doesn’t have any, he shall exchange with a friend – one of them shall send his meal to the other, and the other person shall send him his meal in order to fulfill “and send portions to one another”. (Rambam, Hilchos Megilah 2:15)

This can also be inferred from the Rambam’s list of the different types of foods to send as Mishloach Manos, assuming the order is specific. The first item is “two portions of meat”, as the Rambam just described the obligation to eat meat at the Seudas Purim (and “Ein Simchah Ela B’Basar V’Yayin”). Next is “two sorts of cooked dishes”, which the recipient can also make a staple of his Seudas Purim. Finally, the Rambam lists any two types of foods.

Terumas Hadeshen proves this from the Gemara in Megilah (7b) which describes how Abaye bar Avin and Rav Chanina bar Avin would exchange their Purim Seudos with each other. The Gemara asserts that by doing so they fulfilled the Mitzvah of Mishloach Manos. This clearly illustrates that the purpose of Mishloach Manos is to provide another person with the wherewithal to make a Seudas Purim[1].

Terumas Hadeshen then cites the aforementioned Rambam, arguing that it too implies that one may only give food[2] for Mishloach Manos. Regarding Mattanos La’Evyonim Rambam writes that one should give to the poor “money or food items”, implying that only Mattanos La’Evyonim may be fulfilled by either of the two options, but Mishloach Manos must be food.

The same is implied by the Shulchan Aruch who devotes a separate Siman to the laws of the Mitzvah of Mattanos La’Evyonim but includes those of Mishloach Manos in Orach Chayim 695 together with the laws of Seudas Purim.

Mishnah Berurah (695:20) also rules accordingly. He writes (based on the aforementioned Terumas Hadeshen) that one should not send clothes as Mishloach Manos. He also writes that it may also not be proper to send raw meat as Mishloach Manos because it cannot be eaten right away[3]. Both of these rulings imply that the purpose of the Mishloach Manos is to provide food for a person to eat on Purim.

However, others hold that the directive to ensure that everybody has the means to make a Seudas Purim is in fact the purpose of the Mitzvah of Mattanos La’Evyonim[4], not Mishloach Manos. Mishloach Manos serve a different purpose altogether.

Rav Shlomo Alkabetz[5] explains in his Sefer Manos Halevi on Megillas Esther[6] that Mishloach Manos are intended to increase love and brotherhood (Ahava v’Achva), and to proclaim the unity and bond among the Jewish people, in contrast to the wicked Haman’s description of the Jews as “a scattered and divided people” (Esther 3:8).

In summary, we have two approaches to understanding the Mitzvah of Mishloach Manos: either to provide every person with the means to make a Seudas Purim or to engender unity among the Jewish people. The underlying rationale behind the Mitzvah has possible Halachic ramifications:

If a person sends Mishloach Manos containing foods that the recipient is unable to eat, does he fulfill the Mitzvah?

According to Rav Alkabetz, it is possible that he would nevertheless fulfill the Mitzvah, because the Mishloach Manos still demonstrates his love and friendship even though the recipient may not be able to enjoy it himself.

However, according to the Rambam and Terumas Hadeshen, who hold that the Mishloach Manos are supposed to provide the recipient with food for his Seudah, one would not fulfill the Mitzvah since the foods that he sent will not be of use for the Seudah[8]. On the other hand, the recipient could share the food that he cannot eat with others attending his Seudah, or exchange them with somebody else for food that he would be able to eat. In that case, perhaps even Rambam and Terumas Hadeshen could agree that the sender has fulfilled the Mitzvah.

In any case, it is clear that everyone would agree that it is ideal to send foods that the recipient will be able to eat. It is possible that even Rav Shlomo Alkabetz would hold that sending food that the recipient cannot eat does not fulfill the Mitzvah because doing so does not promote friendship and love between them. On the contrary, the recipient may feel that the sender was not sufficiently interested in him and therefore sent whichever foods came to hand. When the Misloach Manos are prepared thoughtfully and the contents take the recipient’s needs and restrictions into account, the recipient will appreciate the efforts and consideration leading to the intended outcome of brotherhood and friendship.

Furthermore, perhaps even according to the Rambam and Terumas Hadeshen one does not fulfill the obligation of Mishloach Manos in this manner. Although he can share the food with others at his Seudah, it seems that the intention of the Mitzvah is to send food that the recipient himself can partake of

Rav Yitzchak Zilberstein shlit”a ruled that if the recipient has a large family and the Mishloach Manos will augment the Seudah for his family, the sender has fulfilled his obligation, even if the recipient wouldn’t be able to eat the food himself. Nevertheless, if a person is unable to eat at all (e.g. he is entirely dependent upon parenteral nutrition), it is logical to assume that he would be considered as unable to receive Mishloach Manos and the Rambam, Terumas Hadeshen, and Rav Alkabetz would all agree that one does not fulfill one’s obligation by sending him food that only his family will partake of[9].

Shu”t Machaneh Chaim (3:53) deals with a related question. If a person sends bread baked by a non-Jew (Pas Palter) or butter made by a non-Jew (Chem’as Akum) to a person who is careful not to eat these items, has he fulfilled his obligation? From the sender’s perspective, these foods are perfectly permissible, but as far as the recipient is concerned, he has no way of partaking of them. This question would also apply to sending foods (that have reliable Hashgacha) to someone who is stringent about only eating foods cooked in his own house or his own Shechita. We could further extend this to sending meat or chicken to a vegetarian.

In these cases, the food that was sent is in fact fitting to be eaten by the recipient, just that he has made a conscious decision to refrain from them, so we could consider the sender to have fulfilled the Mitzvah of Mishloach Manos. On the other hand, since it is food that he is certain not to eat, perhaps this too would not fulfill the Mitzvah.

Regardless, we can distinguish between food that is inherently unsuitable for the recipient and food that is only temporarily unsuitable but that he will be able to eat again in the future. In the latter case, it is clear that we don’t say that the sender did not fulfill the Mitzvah of Mishloach Manos since he won’t be able to use it for the Seudah. It is obvious that we wouldn’t say that one does not fulfill his obligation of Mishloach Manos by sending milchig foods to a person who will be fleishig until the end of Purim! The obligation is to send food that would generally be suitable for the recipient, even if he cannot enjoy it at this very moment. In conclusion, however, it is clear that each situation must be evaluated on a case-by-case basis.

[2] He adds that a drink would also be considered a ‘foodstuff’.

[3] Mishnah Berurah cites a dissenting opinion who holds that raw meat is acceptable because it can be cooked immediately and eaten.

[4] This is why the minimum amount of money that should be contributed for Mattanos La’Evyonim is an amount that would be sufficient to purchase food for a meal.

[7] Editor’s note: although the responsa literature often discusses the question in terms of “sending candy to a diabetic”, these items are not truly contraindicated for patients with diabetes (but should only be eaten in moderation – as is generally true for all people – and with appropriate doses of medication – e.g. insulin) as opposed to gluten for patients with celiac disease or allergens for people with food allergies, v’ain kan mekom l’ha’arich.

[8] These foods are no better than the clothes or gifts mentioned by the Terumas Hadeshen as being unsuitable for Mishloach Manos. In fact, in some ways they are worse than ordinary gifts as he can make no use of such foods at all.

[9] See also Shu”t Yabia Omer (9 OC 74, Milluim) citing Shu”t Kinyan Ha’Torah (7:55) who rules that if one sends sugary items to a person who is careful not to eat them because of an illness, he has nevertheless fulfilled his obligation as the recipient will be able to eat them when he recovers. Rav Ovadia comments that in any case one fulfills his obligation in this instance as the recipient will be able to distribute them to his family.