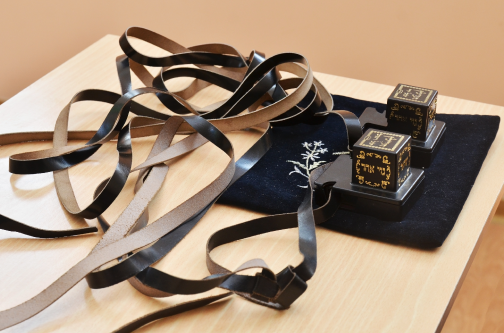 Are Bandages or Hair Implants a Chatzitza for Tefillin?

One of the common sha’alos in Hilchos Tefillin is: if a person has a bandage on his head (due to a medical procedure) is he able to lay Tefillin?

The answer to this question may depend upon a Possuk in this week’s Parsha.

The Gemara in Maseches Arachin (3b) discusses a similar question, regarding the obligation of the Kohanim to wear Tefillin during the Avodah in the Beis Hamikdash. As the Bigdey Kehunah had to be worn directly on the skin[1], they could not lay the Tefilah Shel Yad. Nonetheless, were they obligated to wear just the Tefilah Shel Rosh, or do the two Tefillos always have to be worn together? The Gemara concludes that they were indeed obligated to don just the Tefila Shel Rosh.

The Gemara then explains why a Kohen could wear the Shel Rosh without interfering with the Mitznefes which also had to be worn directly on his head. The Kohen Gadol would leave a gap between the Mitznefes and the Tzitz[2], through which some of his hair would be exposed. It was there that he could place the Shel Rosh.

The answer to this question is disputed by the Rishonim:

The Rashba (Megilah 24b), Ran (ibid. 15b – Dafey Ha’Rif) and Rashi[3] hold that there is no concept of Chatzitza in Hilchos Tefillin. The reason why the Kohanim could not place their Tefillin on top of the Bigdey Kehunah is because the Possuk says that the Tefillin shall be ‘Lecha L’Os Al Yadecha’ – ‘a sign for you upon your arm’. This implies that Tefillin are to act as a sign purely for the one who is wearing them (“lecha v’lo l’acherim”). For this reason,[4] they must sit directly upon his skin[5].

The Rosh (Shu”t 3:4) disagrees. In his view there is a concept of Chatzitza in Hilchos Tefilin and it applies both to the Shel Yad and to the Shel Rosh. The source for this is none other than the Gemara quoted above. Since the Gemara never entertained the notion of laying the Tefillin on top of the Bigdey Kehunah, it must have understood that the Bigdey Kehunah would constitute a Chatzitza.

Where does it say in the Torah that one may not have a Chatzitza beneath the Tefillin? The Rosh contends that it is derived from the words ‘Al Yadecha’[6]. These words imply that the Shel Yad must sit directly upon the arm with nothing interposed between them. The same can be said of the words ‘Bein Einecha’ that are written regarding the Shel Rosh

According to the Rashba and Ran who hold that there is no concept of Chatzitza in Hilchos Tefillin, why did the Gemara say that the Kohen Gadol would wear his Shel Rosh in the gap between the Mitznefes and the Tzitz? The Shel Yad could not be worn on top of his shirt because of the requirement of ‘Lecha L’Oss Al Yadecha’. This restriction would not apply to the Shel Rosh. Why then could the Kohen not wear it on top of his Mitznefes?

The Rashba and Ran each suggest an answer to this question.

The Rashba (Shu”t 3:282) answers that the reason that the Shel Rosh could not be placed on the Mitznefes was because the Mitznefes itself was a Cheftza shel Mitzvah (a Mitzvah article). When a Cheftza shel Mitzvah lies between the Tefillin and the body, it is a Chatzitza because ‘one Mitzvah is considered a Chatzitza before another’. Placing the Tefillin on top of an ordinary hat, though, would be permitted.

The Ran answers that the reason for not placing the Tefillin on top of the Mitznefes is that one may not wear anything on top of the Bigdey Kehunah. This applies even when performing a Mitzvah such as donning Tefillin.

The Shulchan Aruch (O.C. 27:7-8) rules that the Halacha is in accordance with the Rosh. One therefore may not have any Chatzitza between the Tefillin and his body. If one’s head is bandaged and a Chatzitza is unavoidable, one should place the Shel Rosh on top of the bandage[7] but not[8] make a Brachah on it[9].

If a man wears a toupee, how should he lay Tefillin?[10] Rav Moshe Feinstein zt”l (Igros Moshe, O.C. 4:40:18) ruled that whilst in Shul such a person should don his Shel Rosh without a Brachah but when he returns home, he should remove the toupee and put on his Tefillin again, this time with a Brachah on the Shel Rosh.

Rav Shlomo Zalman Auerbach zt”l (see Halichos Shlomo, Hilchos Tefilah, p42 in footnote) advised that he do the opposite. Before leaving for Shul he should put on his Tefillin with a Brachah and say Krias Shema. He should put them on again in Shul but without a Brachah.

Considering the opinions of the Rishonim quoted above, Rav Shlomo Zalman’s ruling appears to be the most logical. According to the Rashba and the Ran, if one places the Shel Rosh on top of a toupee, he would fulfill his obligation. If one would follow Rav Moshe’s opinion, according to those Rishonim he would have already fulfilled the Mitzvah while in Shul, without having made a Brachah. It is surely preferable to lay Tefillin at home (sans toupee) with a Brachah before going to Shul.

If a person had hair implants in the area of his head where he usually lays his Shel Rosh, does this constitute a Chatzitza?[11]

Rav Moshe (ibid.) ruled that implants should not be considered a Chatzitza. Hair implants are impossible to remove; this makes them dissimilar to other Chatzitzos. Moreover, a person who has undergone such a procedure wouldn’t ever want to remove them. For this reason, even if the procedure entailed attaching foreign hair to his head, it still would not be considered a Chatzitza.

[1] This is derived from the Possuk (Vayikra 6:3) that states that the Bigdey Kehunah must be worn by the Kohen ‘Al Besaro’ – ‘upon his skin’.

[2] Ostensibly, the same amount of hair would not be covered by the Migba’as of the Kohen Hedyot

[4] This reasoning only applies to the Tefillah Shel Yad where the words ‘Lecha Al Yadcha’ appear.

[5] This is also the reason why the Mishnah in Megilah condemns the practice of covering one’s Tefillin in a layer of gold. Since they must be an Oss for the one who wears them and not for others, they may not be covered with another material of any sort.

[6] This is a similar Drashah to that made by the Gemara regarding the Bigdey Kehunah – see footnote 1.

[7] As according to the Rashba and the Ran one would fulfill one’s obligation in this instance.

[8] If the bandages merely interfere between the straps of the Shel Rosh and one’s head, one may recite a Brachah

[11] During the first few days following a hair implant procedure, bandages cover the affected area of the head. It is therefore not possible to make a Brachah on the Tefilah Shel Rosh as outlined above. The Nishmas Avraham cites Rav Yehoshua Neuwirth zt”l who advised that a person who wishes to undergo this procedure should time it for Erev Sukkos or Pessach. That way he will have a clear week in which, according to many customs (and as is prevalent in Eretz Yisrael), he will not be laying Tefillin regardless. If he lives in a place where the Minhag is to lay Tefillin on Chol Hamoed (as is the case in much of Chutz Laaretz), he should only put on his Shel Yad. People will see that his bandages on his head prevent him from putting on his Shel Rosh and will not think that he is deviating from the Minhag Hamakom.